This site was updated July 2013

I was inspired by the the film the Ninth Gate to reproduce the book featured...... but with a twist.
Those of you accessing this page will know that the film is based on the novel El Club Dumas by Arturo Perez-Reverte, and stars Johnny Depp as Dean Corso, a rare-book dealer hired by a wealthy book collector to validate a copy of The Nine Gates of the Kingdom of Shadows, a book by the 17th century author Aristide Torchia. 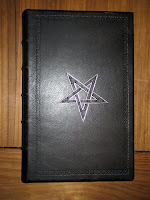 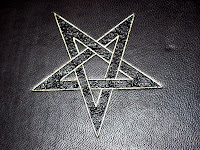 These 2 images are from the binder who made the props for the film.The grain in the leather shows it is a poor quality sheep skin. The binding for my version will look similar to the one in the film but it will be bound in a fine hand tanned consecrated virgin calf and not a rough old piece of chrome tanned "hair" sheep. It will also be a true 17thC style binding, the one in the film is just a leather "case." The colour will be a 17thC formula that produces a rich blue - black called "midnight black" instead of a black aniline dye. I was thinking of blind tooling goetic Sigils within the pentacle.

The book in the film consists of paragraphs of printed text that is repeated called "filler text" and doesn't actually mean anything. Even the title "DE VMBRARVM REGNI NOVEM PORTIS" doesn't translate correctly (The "Umbrella" Kingdom of Nine?) Portis is not a Latin word. The true title is UT REGNUM DE UMBRA NONUS PORTA, "Porta" meaning "Gate" or "gate to a city."
The twist being:- My version comprises of "Nine Books of the Mysterious Arts" each "gate" opening a genuine book of alchemy or occult lore.
These are some of the pages I have typeset and printed on an antique laid. 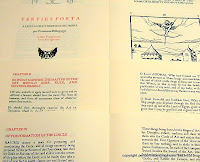 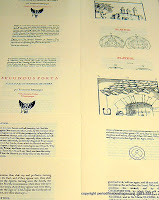 The text is printed in a 17th century type face and the first mystery is the "Clavicle" or The Greater Key of Solomon in Two Books. Each book is an important occult or alchemy work that is preceded by a title page, a numbered "gate" with the Latin empowerment and the tarot style illustration signed either AT or LCF 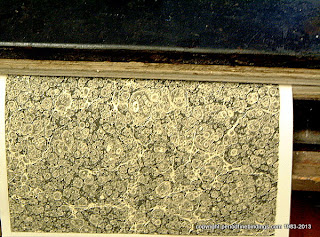 The endpapers are hand marbled in the black antique spot design.
Posted by Paul at 1:15 PM

Nonus Porta will be by commission only, for serious practitioners/collectors. I will only be making between 4 and 6 copies per year. 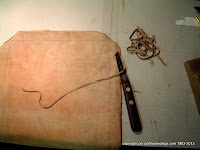 The book is hand sewn on raised cords with laced-in boards in a 17thC "herringbone" stitch, see the vid on colouring the leather, 12 layers are used to make the black, the first colour being yellow. The leather is bordered with a grain and pared by hand. 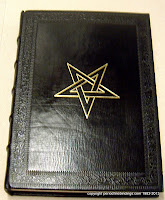 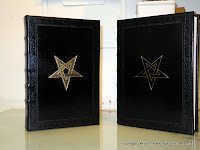 I also do a variant copy as you can see.﻿

The Ninth Gate is now open for those who dare to step through. Click on the link below for the REAL Ninth Gate. 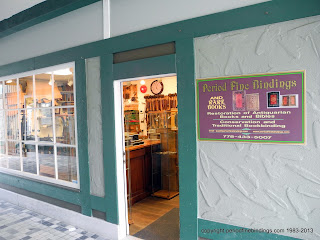